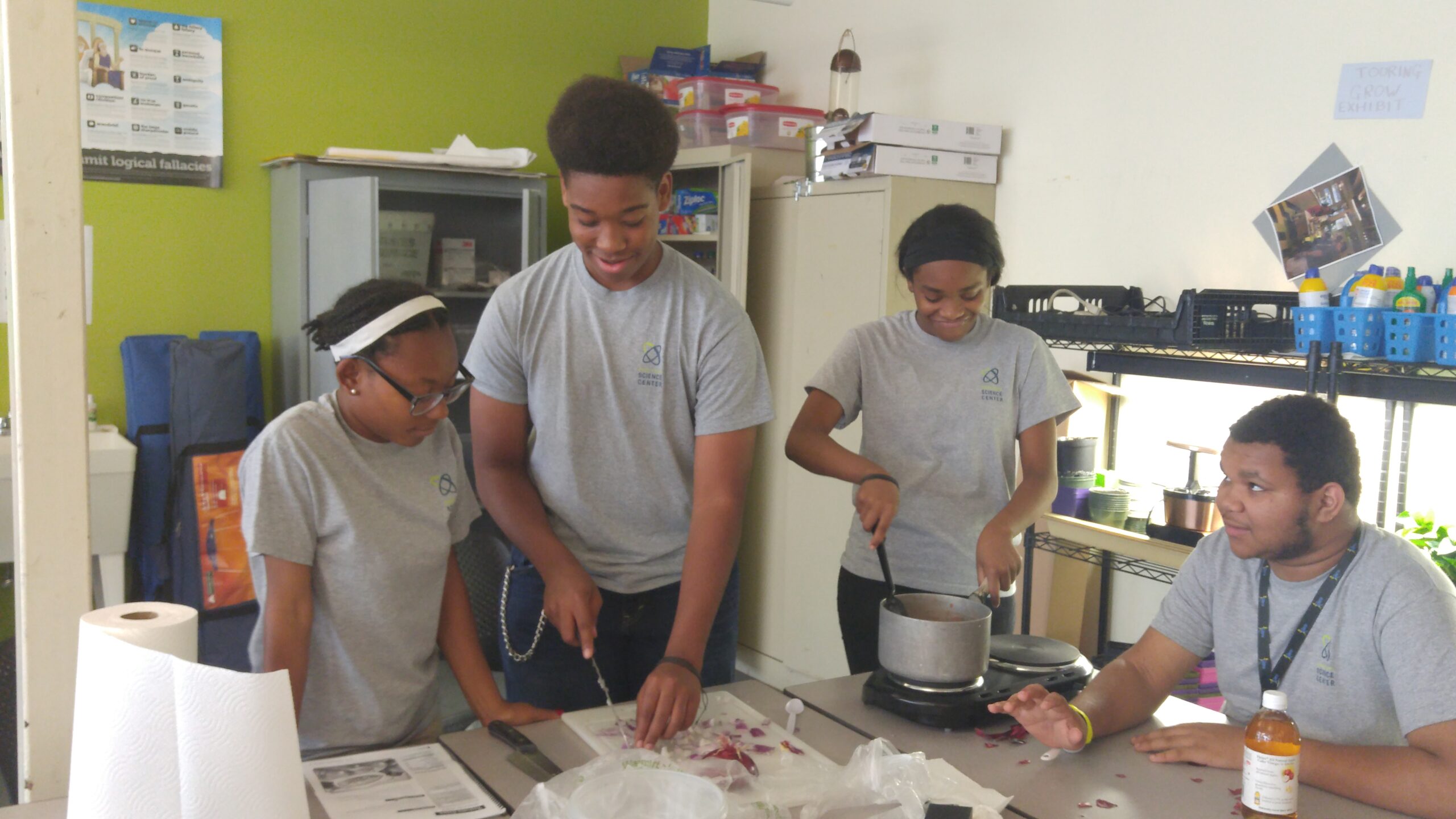 The Youth Exploring Science (YES) Program is a work-based youth development program that uses science investigation to foster academic and professional skills.  The Agriscience component focuses on increasing the teens’ knowledge of plants, comfort with nature, and healthy eating habits.

Kerry originally joined the YES Program as part of a Climate Change grant, educating the teens’ on global warming.  When the grant ended, she took over the Agriscience component of the YES program. Though Kerry studied Biology in undergrad, she never took a botany class and had very little gardening experience.  But she loves being in nature and was inspired when she realized that the teens had little exposure to nature in their everyday lives.  Kerry recalled that during a gardening lesson with the teens, she pulled a persimmon from a tree and when she took a bite, the students were shocked that it was okay to eat fruit right off a tree. 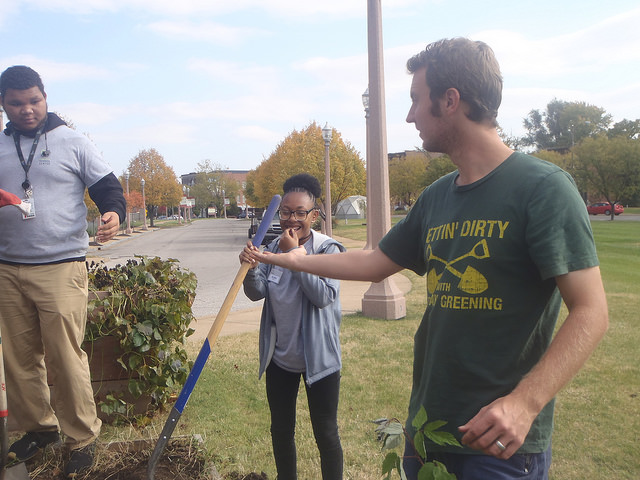 The garden is a large part of the Agriscience classroom and incorporates outdoor education into their indoor curriculum.  Teens have access to microscopes to observe plant cells and are able to interact with worms, salamanders, crickets that live in the classroom.  The teens use the gene editing technique CRISPR and raspberry pi computers in connection with the garden for their advanced science curriculum. For one project, in collaboration with the Danforth Center, the teens are using raspberry pi computing to create a “vegetable piano”.  Using vegetables from their garden, sensors are transmitted from the vegetable “keys” to activate sounds as if playing a piano. The teens are also currently applying for a grant for a hydroponics system they designed to grow clover for the Wildlife Rescue Center.

In addition to science, Kerry uses the YES garden to build a connections to food, health, and nature.  Since joining the department, she has incorporated a heavier focus on nutrition and healthy eating, even bringing in guest chefs to show teens how to use the food they’ve grown.  She believes it is important to have teens draw connections between food from the grocery store and food from the garden. In one lesson, the teens compared basil from the garden and the grocery store,  and they were able to see how much fresher basil from the garden was. 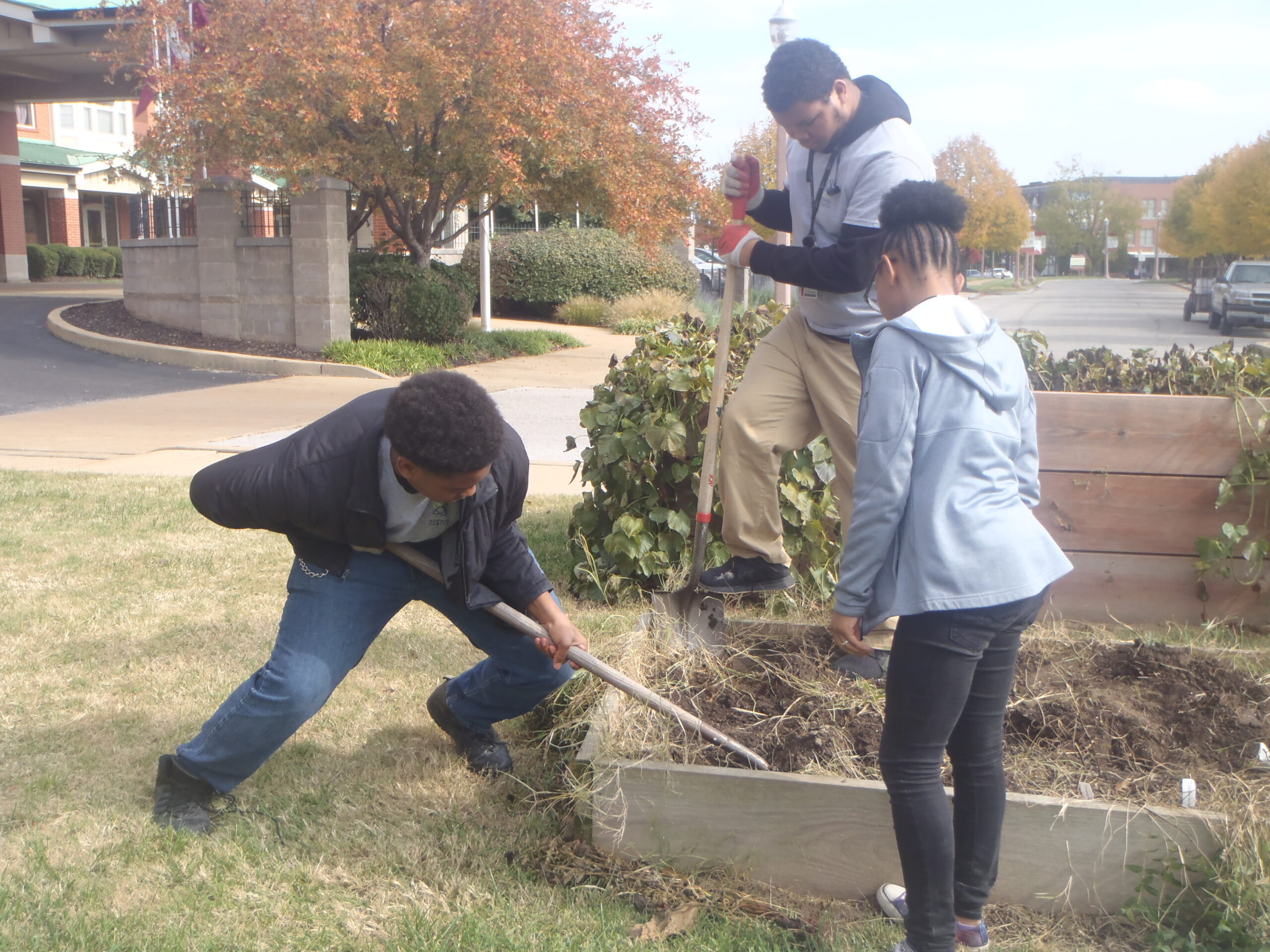 The teens enjoy harvesting their garden crops, but they also really like being able to teach younger children what they’ve learned in the outdoor classroom.  The opportunity to facilitate their own lessons empowers the teens to become the teachers. In collaboration with the Saint Louis Science Center GROW Exhibit, the teens were able to lead a lesson for children making “rice cake pizzas” using fresh basil picked from the garden.

Kerry’s favorite thing to plant with her students is tomatoes because she likes eating them! But she also enjoys working with native plants because even though they’re local to Missouri, it’s often the first time the teens are interacting with them.

Her advice to other school gardeners is to get students to appreciate the little things in the garden like worms and bugs.  It’s all connected and it’s important to get students comfortable with being in nature!